Suspects arrested Friday in a foiled terrorist plot in France had just started making the same powerful explosive used in the ISIS-directed Paris and Brussels attacks, and they appear to have been inspired by the terrorist group, a source close to the investigation told CNN.

French police “thwarted an imminent attack on French soil” when they arrested four people, including a 16-year-old girl and three men, in cities across France, Interior Minister Bruno Le Roux said in a statement. The girl had pledged allegiance to ISIS in a cellphone video, the source said.
All four suspects are French nationals, a source familiar with the investigation said.
A partially assembled improvised explosive device was also found as part of the investigation, according to Le Roux’s statement.
When they were arrested, the plotters had just begun making TATP, the same explosive used in Paris and Brussels, the source tells CNN. TATP, or triacetone triperoxide, is a chemical powder made from common household objects that can explode when subjected to heat or friction.
The arrests in Montpellier, Clapiers and Marseillan follow a two-week investigation led by the anti-terrorist division of the Paris Public Prosecutor in collaboration with the judicial police of Montpellier and the national police force, the statement said.
A source close to the investigation told CNN that a 21-year-old man arrested in Clapiers is suspected of planning a suicide attack in France. French intelligence services know he tried to travel to Syria in November 2015, the source said.
The man was in a relationship with the girl taken into custody, the source said. And investigators believe the plan was for her to leave France just before the attack, then join ISIS in Syria.
Le Roux praised the work of investigators that led to the arrests, “among them three directly suspected of preparing a violent attack against our territory.” 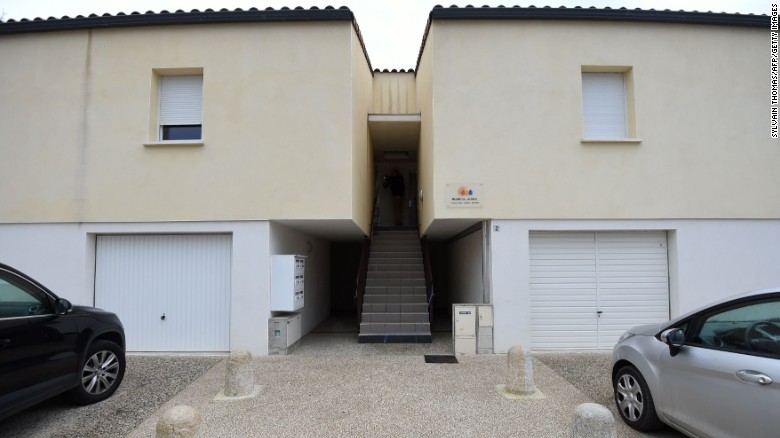 French anti-terrorist police on Friday raided this apartment, where suspects believed to be involved in plotting an attack were arrested, in Clapiers, near Montpellier, southern France.
The announcement came a week after a soldier shot a man wielding a machete near the Louvre museum in Paris. French authorities opened a terrorism investigation after police said the man, a 29-year-old Egyptian and a resident of the United Arab Emirates, wielded the knife and shouted “Allahu akbar,” an Arabic phrase that translates to “God is greatest.” One soldier was injured.
France has been under a state of emergency since the Paris terrorist attacks in November 2015, in which 130 people were killed and hundreds wounded in massacres at a theater, a stadium and cafes. That January, 17 people were killed in attacks in Paris on the satirical magazine Charlie Hebdo and at a kosher grocery store, and in the Paris suburb of Montrouge.
Last July, a radicalized Tunisian plowed a 20-ton truck into crowds on the Promenade des Anglais in Nice during a Bastille Day celebration, killing 86 people and wounding 200 others.
Brussels has also been on high alert. Suicide bombers struck the city’s airport and a subway station in March 2016, killing 32 people and wounding more than 300.
Source: http://edition.cnn.com
Achilleas K 2018-05-18T15:45:11+00:00 February 13th, 2017|Uncategorized|0 Comments